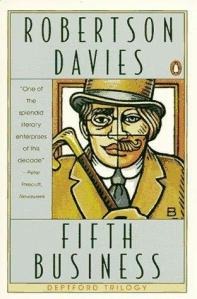 You will encounter more than one conjurer in Fifth Business by Robertson Davies, and one of them is Davies himself.  His novel unfolds before your very eyes in ways that are delightful, mysterious, and scarcely to be believed.  The title comes from a stock character in opera and theater.  The fifth business is not the main plot, yet is still necessary for the main plot to work, and its carrier is neither hero nor villain, but is nevertheless essential to the story.

In the world of Fifth Business every character has his part to play, and in classic Daviesesque fashion, those parts are inscrutably rooted in our ancient mythical past.  But the story is no allegory.  Davies’s characters are believable people and you grow to love them and hate them over the course of the book.

I don’t want to give too much away, but the story starts on a snowy Christmas day in the remote Canadian village of Deptford with the throwing of a snowball, an act which sets in motion a strange and outrageous series of events which span five decades and three continents.  Davies is by turns hilarious, learned, disturbing, and compassionate.  If you slow down and give it a chance, Fifth Business will leave you not quite the same reader, or perhaps even person that you were when you started it.

I forget what I was looking up when I came across this entry in my old copy of Brewer’s Dictionary of Phrase and Fable:

“Threadneedle Street. The street in the city of LONDON leading from Bishopsgate to the BANK of England.  The name first appears as Three needle Street in 1598, and previously it seems to have been called Broad Street, forming part of the present Old Broad Street.  The name is usually said to derive from a signboard with three needles on it, or from the arms of the Needlemaker’s Company; but it may derive from the children’s game of thread-the-needle having been played there.”

The entry caught my eye because I have seen the sign for Threadneedle street in London and wondered where the name came from.  Ah, that the wide universe can contain such tiny wonders as Threadneedle street.  On a cold day this thought somehow warms me up.

This is a disjointed, outrageous, hilarious, fascinating, meandering tour through a strange, lush, vanished America. It is also a series of autobiographical meditations by a singular genius, whose voice you will find yourself imitating in your speech and writing as you immerse yourself in this lovable book. It is an example of writing meant foremost to entertain and educate, which also attains the level of high art. Twain never neglected his audience.

The most engrossing sections describe the author’s education as a steamboat pilot. Vivid details and anecdotes link up to tell the story of a young man gaining confidence in the world, and also give you a peek into the prodigious feats and odd habits of the fraternity of steamboat pilots.  The rest of the book is an account of Twain’s trip down the Mississippi decades later as a rich old man.  The transformation of America during his lifetime is remarkable, and drew comparisons in my mind to what I am reading about life in China today.

Life on the Mississippi is a wonder and one of the great American books.

Amundsen in his work clothes.

Today is one day after the one week anniversary of the 101st anniversary of Roald Amundsen’s arrival at the South Pole.  I meant to get this up last week, but I am bad at remembering anniversaries (just ask my partner).  This is a column I wrote for a now defunct part of the American Management Association’s Web site.  It seemed appropriate for this cold, snowy day in New York.

Today marks the 100th anniversary of one of the great feats in the history of management: Roald Amundsen’s arrival at the South Pole, the first such successful expedition in human history.

It might seem odd to mention exploration and management in the same breath, but we would not remember the names of all the great explorers, from Leaf Erickson to Neil Armstrong, if they had run out of supplies or lost command of their teams somewhere along the way.

Amundsen had no technological or financial advantage over his rivals.  END_OF_DOCUMENT_TOKEN_TO_BE_REPLACED

FEED is the story of a group of teenagers in a future where something like a combination of Facebook, Twitter, and Amazon can be implanted directly into everyone’s brain.  We follow Titus, the narrator, and his friends through a world where the only thing not on the verge of extinction is relentless consumption fueled by ubiquitous advertising.  On the moon, Titus meets a quirky girl who questions the feed, and their relationship becomes the center of the story.

FEED is fast-paced, brilliantly written young adult science fiction.  But it is such a powerful, clear-headed book that it cannot help but leave readers of any age deeply uneasy about the world they inhabit.  This is the effect of all great sic fi, and I put FEED into that category.  It belongs on the shelf next to Flowers for Algernon, Fahrenheit 451, Neuromancer, and 1984.

What FEED gets right that even most of those other books don’t quite grasp is that the most important human technology is not rockets or computers, but marketing and advertising, once known by the more honest name of propaganda.  END_OF_DOCUMENT_TOKEN_TO_BE_REPLACED

Even if it is well below the standard of Crichton’s solo novels, MICRO is a competent thriller that has some great moments.  Like Jurassic Park, the concept is simple: a group of humans have to make it across a lush, hostile landscape filled with monsters, and time is running out.  In this case the monsters are not extinct dinosaurs but the living insects and other small creatures that populate a small nature preserve in Hawaii (based on the Lyon Arboretum in Oahu’s Manoa valley, where I took the photo attached to this post).  Through a cutting-edge industrial process gone wrong, the humans in the book are shrunk down to half an inch in size, and this fuels Crichton’s trademark combination of fear and wonder.  When relatively enlarged to the size of a house, a wolf spider can be just as fearsome and fascinating as Tyrannosaurus Rex. (Seriously, how many posts can I write about giant spiders!?)

END_OF_DOCUMENT_TOKEN_TO_BE_REPLACED 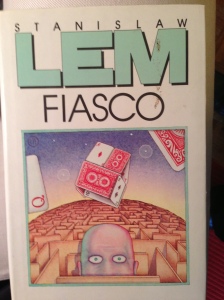 FIASCO is a science fiction novel with all the trimmings, but it is also a mind blowing work of literature.  It begins with a man alone inside a giant mechanized transport getting lost in a hostile alien forest, and unfolds into a ripping good first contact story, of cosmic proportions.

You get all that because Lem was an irrepressibly enthusiastic genius, bursting with a desire to let his love of these subjects into the world.  Think of this book as a (mostly) benevolent Pandora’s Box.  Once you open it, there is no going back for you.  It’s one of those rare books that entertains you all the way to a slightly different view of yourself in relation to a suddenly bigger, weirder universe.

Tweets: tiny thoughts for your amusement